The deadline to offer arbitration to eligible players is December 12th. The Yankees have 5 important eligible players, and all of them see likely to be offered arbitration, except for maybe one of them. The five players I am talking about are Melky Cabrera, Sergio Mitre, Brian Bruney, Chad Gaudin, and Chien-Ming Wang. Obviously, Wang is the big question here. As you know, Wang is coming off an awful season scarred by a shoulder injury. Wang underwent surgery on his shoulder back in July, and he is not expected to be ready to pitch until mid-season 2010, at the earliest. This is not Wang’s first shoulder injury, if you remember he has had two shoulder injuries before this most recent one.

So the first question is, “Do you offer Chien-Ming Wang arbitration?” The general opinion among the NY Media is that the Yankees will not offer him arbitration. I don’t know hoe much to put into that opinion, you can take it however you wish. But for the sake of argument, let’s say the Yankees don’t offer Wang arbitration, and he becomes a free agent. Do they try to sign to an incentive based contract with a low base salary, or do they just let him go. If they let him go there will definitely be other teams interested, and the Los Angeles Dogders may be one of them. According to MLBTR, Chien-Ming Wang told Taiwanese reporters that he wishes to stay with the Yankees, but when asked about the Dodgers he said he would be open to the idea. That really doesn’t mean much because a)Wang would probably be open to all 30 teams and b)Who knows if the Dodgers are even interested in Wang?

My opinion is that the Yankees can not let Wang go. The best route would probably be to decline arbitration, and then try to sign him to an incentive based contract in which he could earn much more than he would via arbitration, but only if he meets the requirements of the incentives. This way if Wang doesn’t pitch well in 2010, the Yankees wouldn’t have spent too much money on him, but if he does pitch well, he would earn a nice paycheck that the Yankees would gladly pay him for his performance. This way it works out both ways for the Yankees, and there is still something in it for Wang. I just think Chien-Ming Wang is too valuable to let get away, let’s remember when he is right, he is a number one starter and he’d only have to be a number three with CC and Burnett. What’s your opinion on this? 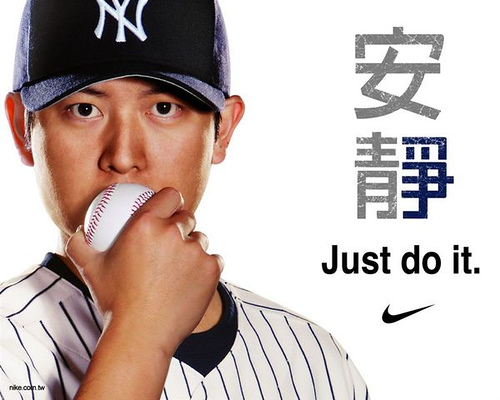 If you remember, I've used this picture before. And I like it!

Remember, this a not a topic about the rest of the rotation, and not a discussion on Chamberlain or Hughes. Also take into account Wang will not be ready at the start of the season.

13 thoughts on “The Wang Situation”