First let me start off with the starting lineup

And on the mound, Carsten Charles Sabathia

Melky is not in the starting lineup tonight, he has been hitting very well of late, but I guess Girardi wanted him to have a day off.

Johnny Damon has been on fire lately! In the last nine games he is batting .477 with 16 RBI’s. In addition, over that span of nine games he has hit 16 extra base hits (5 of them homers), with a least one each game. He is making a strong case to be resigned. However, it is early and the Yankees look like they are leaning against it.

Reportedly, Mark Teixeira was spotted at the Yankee game last night going 2-4. We will see if he shows up to the rest of the Yankee games this year. In the beginning of the year, a man with similar looks to Teixeira played for the Yankees and batted to a sub-.200 average.

Pick on someone your own size

Yesterday Brett Gardner hit a 2 run home run, the first homer of his career. When Brett got back to his locker after the game he saw a baseball lying there and it read,  “First career home run, solo shot of Sam Richman for Brett Gardner. 05-14-09.” The problem was that Gardner actually hit a two run home run, off of Scott Richmond, on 05-13-09. After seeing the ball, Gardner said, ” I hope that’s not really the ball.” Fortuanetly for Brett, it was not the ball. The real ball with the real information was given to Gardner later on.

Don’t forget to vote for Nick Swisher for the 2009 All Star Game. I know he is not doing well lately, but vote for him anyway. Make the guys over at VOTESWISHER.COM happy. Click here to vote (you have to write-in Nick Swisher). 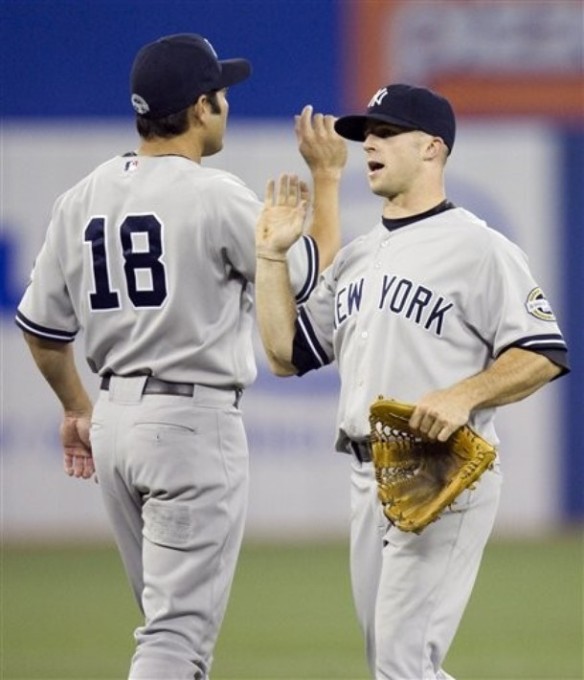 I am still without my computer (I am currently using a friend’s computer). I should recieve a new computer on or around Monday, and once I do posts will appear regulary again.