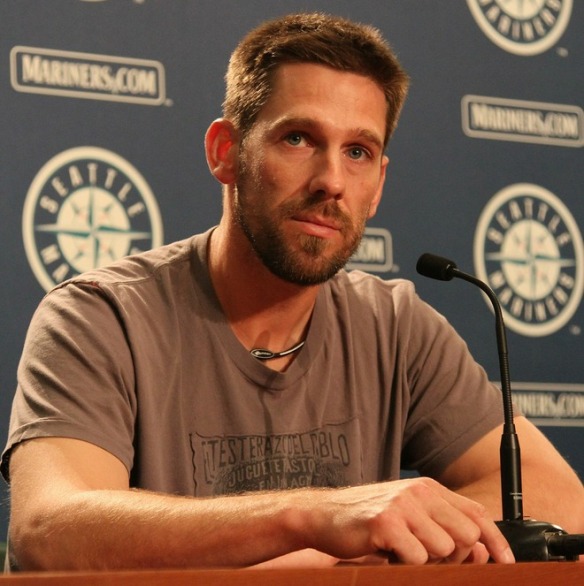 "Cliff wonders what he will look like in pinstripes." Photo Credit: Getty Images via Yahoo Sports

Just Yesterday, I was convinced that Cliff Lee would be wearing pinstripes this season. And so was everyone else, including the Yankees. Jack Zduriencik (the Mariners GM) and Brian Cashman had a deal in place that would send Cliff Lee to New York and in return Jesus Montero, David Adams, and Zach McAllister would head to Seattle. The Yankees completely agreed to the deal and it was reportedly just pending physicals. However, Zduriencik decided to do some last-minute shopping and he checked in with the Texas Rangers. The Rangers, feeling the heat, agreed to include Justin Smoak in a deal for Cliff Lee, and that was apparently the selling point for the Mariners. Jack Zduriencik then backed out of the Yankees trade and sent Cliff Lee along with Mark Lowe and a stack of cash (2.5 million) in exchange for the aforementioned Justin Smoak, Blake Beavan, Josh Lueke, and Matthew Lawson. The Mariners claimed concerns about David Adam’s ankle as the reason for backing out of the Yankees trade, but I don’t buy that for a second, and I don’t feel the need to explain why.

So, where does leave the Yankees? Well, personally I am glad the trade did not go through. The general consensus is that Cliff Lee will be a Yankee next season anyway, and I tend to agree. And I am extremely pleased that Jesus Montero is still in the organization. However, the Yankees front office are not happy with the way this went down. The Yankees believed they had the deal in place and it was essentially a finished thing and they are livid that the Mariners backed out after allegedly shopping the Yankees offer around. In my opinion, a GM has the right to check in with other teams when on verge of trading a coveted player, however, many people think the Mariners took it too far. Joel Sherman has some quotes from a Yankee official and an official from another club.

Yankee official: “I don’t think 30 general managers would agree that what the Mariners did was real ethical.”

Other club official: “It’s disappointing to hear that Jack shopped that around, that’s not right. You don’t do that with any team and you don’t do it with the Yankees, because Cashman will drop you in a heartbeat. You don’t use the Yankees because they never forget.”

It’s nice to hear an outsider speak so highly of the Yankees and Brian Cashman in particular, but the fact of the matter is, the Mariners most likely used to the Yankees to get what they wanted. And from what people are saying, they took it way too far. I wouldn’t expect any trades between the Yankees and Mariners going down anytime soon. The relationship between Brian Cashman and Jack Zduriencik is presumably strained after what happened yesterday. And let’s not forget, the Yankees were not all too pleased when the Mariner’s asked for Austin Jackson last year in a potential trade for Jarrod Washburn.

So, what do we make out of this. Well, while the Yankees front office might have been hurt by the Mariners, Brian Cashman is respected in baseball and has strong relationships with several GMs, so I wouldn’t worry about that. Also, while the Yankees will not be sending Cliff Lee to the mound this season, there is a very good chance they will be doing so next season and for years to come. It’s only a matter of money this offseason when it comes to signing Lee and the Yankees can outpay anyone for Lee, who they obviously really want. In addition, Jesus Montero is still a Yankee!  Just think, Jesus might even be catching Lee one day.