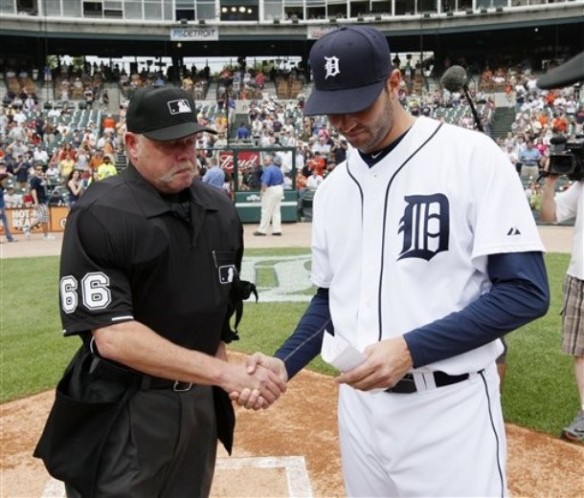 "There are no hard feelings between Galarraga and Joyce."

As you know, Armando Galarraga of the Tigers was pitching a perfect game the other day and with two outs in the 9th, umpire Jim Joyce called Jason Donald safe on a ground ball to first base. After watching replays, Donald was obviously safe and should have been the 27th out of Armando Galarraga’s perfect game. Immediately after the play, fans all over the nation began calling Jim Joyce names, complaining, arguing, and overreacting.

Sure, Jason Donald’s ground out would have been the last out of a perfect game. But, the fact is that Jim Joyce is human, and humans are known for their uncanny ability to make mistakes. Some people argue that Joyce should have just called Donald out even if he really wasn’t, but what makes Jim Joyce one of the better umpires in baseball, is what would have made that so hard to do. Joyce does not let situations affect his calls, he just goes with what he thinks is right. Unfortunately, his “human element” took over at the wrong time.

This incident obviously gained much attention. People all over were arguing about it, and still are. However, the funny thing is that the only two people who handled the situation correctly were Armando Galarraga and Jim Joyce. Let’s see what they had to say.

“He feels so bad — really bad,” Galarraga said of Joyce, more than a half-hour after the game. “He hasn’t even changed out of his uniform.”

“Everyone knows it’s so special for any pitcher, in any league, anywhere, to throw a perfect game. Tomorrow or maybe tonight, I’ll realize, ‘I got one.'”It’s not in the book.”

“I’m not the kind of guy who would tell him (Joyce), ‘I did my job. Why didn’t you do yours? Why didn’t you do better in that situation?’ I understand that nobody’s perfect, and it’s a hard job,” Galarraga said.”Hopefully it will happen again. But I’ll tell you something: I’m going to keep that CD (of the game), and I’ll tell my son, ‘I got one. It’s not in the book. It’s not official. But I got one.’ ”

“And when this guy go talk to me, he can’t even talk, he was crying. And I understand nobody’s perfect. It’s part of the game.”

Fortunately, cooler heads have prevailed and Jim Joyce even got a great ovation from Tiger fans the day after the infamous call. The class of Jim Joyce and Armando Galarraga must have spread to Tiger fans through osmosis. 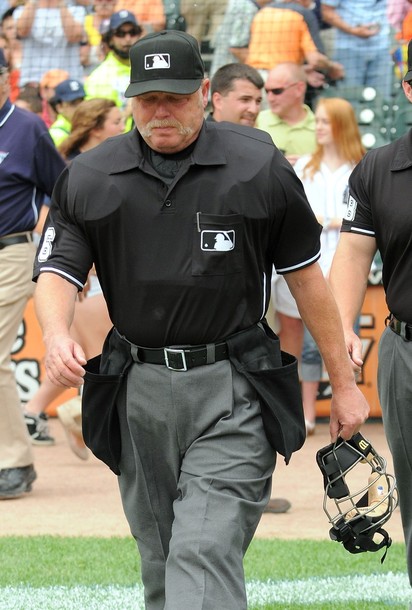 "Jim Joyce tears up during the great ovation from the Tigers fans."

And, in reality we all know Armando Galarraga pitched a perfect game, and no one knows that more than Galarraga himself..