After losing four out of their last five games, The Yankees defeated The Minnesota Twins tonight with the help of Alex Rodriguez. Let’s break it down…

Allan James Burnett started tonight for the Yankees and he went 6.2 innings while only allowing 3 runs (2 earned). He wasn’t great as he walked 4 batters and only struck out 4 batters, but he held the damage to a minimum. Damaso Marte followed Burnett with two outs in the 7th inning, and with the Yankees leading 3-2 Marte gave up an RBI single to Joe Mauer and an RBI double to Justin Morneau. Marte did manage to escape the 7th inning, however. Joba Chamberlain came in to pitch the eight with the Yankees leading 7-4 and he struck out the side. PitchFX clocked Joba’s fastball in at an average of 95 MPH tonight with the high at 96, for those of you wondering. Chamberlain was awarded the winning pitcher for his effort. In the ninth, some guy named Mariano Rivera pitched a 1-2-3 inning and that was the end of the story. 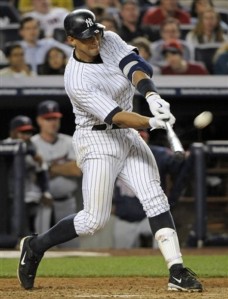 The Yankees offense had been kind of stagnant lately, but it seemed to awaken tonight. In the bottom of the 4th, with the Yankees down 1-0, Brett Gardner hit a solo home run. Later in the inning Robinson Cano doubled to score Mark Teixeira. In the bottom of the fifth Mark Teixeira doubled to score Brett Gardner. Then the big blow came in the bottom of the seventh when Alex Rodriguez came up to the plate with the bases loaded and The Twins leading 4-3. On the second pitch of the at bat Matt Guerrier gave Alex a pitch to hit and A-Rod took advantage of it depositing it into left field for a grand slam. The Yankees then led 7-4 and would never look back, but Francisco Cervelli tripled in the eight to score Juan Miranda just for fun.

Here's one of those cool Win Probability graphs for you.

Nick Swisher left today’s game with a strain in his left biceps which has been bothering him lately. fortunately, according to Chad Jennings the MRI came back negative.

So, as you can see 161st Street looks a little different, haha! This design obviously isn’t set in stone, I just didn’t feel like working on it anymore today, so please any suggestions to make it better would be great. By the way, I’ve noticed that depending on the size of your computer screen you may or may not see the full background image. Larger screens will display the blue background with pinstripes running down it, smaller screens will only display the blue background (because the pinstripes are cut off). Either way, let me know what you think about it.