After winning game 1 of the ALDS, the Yankees sent A.J. Burnett to the mound with Jose Molina as his personal catcher to face Nick Blackburn and the Twins. Both starters ended up throwing good games, but in vastly different ways. Burnett  went 6 innings, gave up only 3 hits and 1 run, but he was in trouble all night because of his 5 walks allowed, but he managed to give the Yankees a good game and strike out 6 batters. Blackburn had a no hitter going through 5.2 innings before Robinson Cano broke it up with a clean single. However, the Yankees would not score until the following inning (the 6th) when Derek Jeter hit a ground rule double with 1 out, and later in the inning Alex Rodriguez scorched a sharp single to left field to score Jeter, which at the time brought the game even to 1-1. In the 7th inning the Yankees brought Joba Chamberlain in to replace Burnett. Joba got the first two batters out, but allowed a single to Joe Mauer and Joba made way for Phil Coke who came in and struck out Jason Kubel to end the 7th. In the top of the 8th with the score still 1-1, Joe Girardi called on Phil Hughes. Hughes got the first two outs, but then fell in trouble as he walked Carlos Gomez, and then gave up back to back singles which allowed Gomez to score. Mariano Rivera came in the try and get out of Hughes’ mess, but before he was able to strike out Orlando Cabrera for the third out, Mo gave up a single to Denard Span which made it 3-1. Going into the bottom of the 9th, the score remained 3-1 Twins and the Yankees had to face Joe Nathan. Mark Teixeira led off the ninth with a single, which brought Alex Rodriguez up to the plate. Rodriguez worked the count until he got his pitch which he hit out to the Yankees bullpen for a two run homer to tie the game up! Was a pie inevitable for the Yankees? Nathan was able to keep the score tied in the ninth, so the game went to extra innings. The 10th inning proved to be an inning of missed opportunities for both teams, as they moved to the 11th. Damaso Marte came in to pitch the 11th because two lefties were due up, Joe Mauer and Jason Kubel who both got hits off of Marte. Joe Girardi was forced to take out a disappointing Marte, and he replaced him with David Robertson. Robertson came in and gave up a single to the first batter he faced to load the bases with nobody out. Then came the Houdini act. Robertson got the first out on a hard liner right at Teixeira. Then he got the next batter to hit a grounder to Teixeira who came home with the ball for the second out. Robertson got the third out on a flyball to center, ending the inning without surrendering a run. 3-3 going into the bottom of the 11th. Mark Teixiera led off the 11th with a walk off homer to give the Yankees the victory, and as a reward he received a pie courtesy of A.J. Burnett.

A-Rod recieves a curtain call after his game tying home run in the 9th. 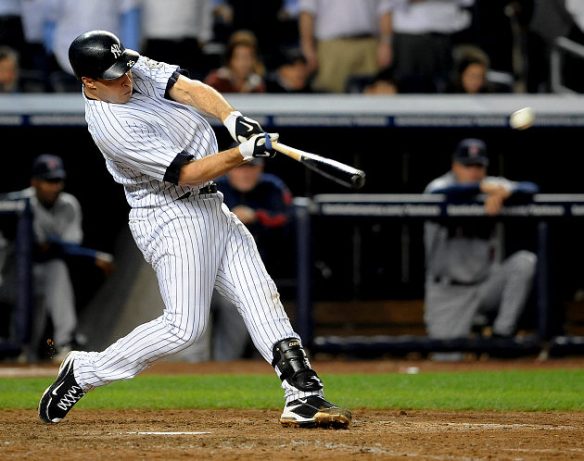 Teixeira hits a wall scraper to win the game for the Yankees. 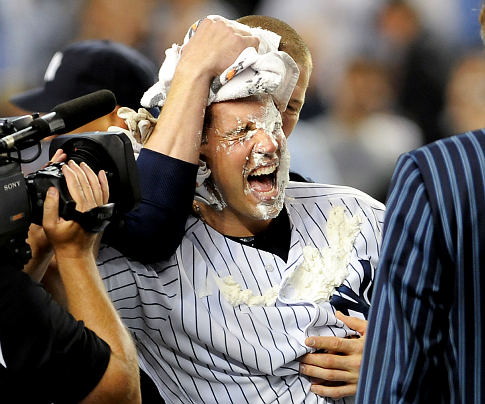 Teixeira gets his first taste of walk off pie.