2 weeks ago the Yankees began a 4 game series against the Red Sox at Yankee Stadium with a small 2.5 game lead in the AL East, we all know how that ended. Tonight the Yankees begin a 3 game series against the Red Sox in Boston, but instead of a 2.5 game lead, the Yankees hold a 6.5 game lead.While no Yankee team has missed out on the playoffs with a lead this big, this late into the season, I don’t consider any lead safe in the monstrous AL East. Still, the Yankees are in a great position, and no matter what happens in this series, the Yankees will still walk away in first place. I think the best way to get my point across is through a famous Yogi-ism, “It ain’t over till it’s over.” I digress, here is tonight’s starting lineup via Peter Abraham:

And on the mound, Andy Pettitte

Yep, that’s right Damaso Marte has been recalled. I don’t expect you to remember the last time he pitched in a major league uniform (which happened to be April 25th in Boston), but you might remember that he recently reached the rehab deadline of 30 days where the Yankees had to bring him back up, of think of something else. Well, they decided to keep him down for so called “personal reasons”, at this point who knows if there is anything to that. Anyway, if Marte is truly healthy he could really be a huge addition to the Yankee bullpen, remember he was actually a very good pitcher. In case you are wondering, Ramiro Pena was optioned down to make room for Marte, now before you scratch your head or complain, consider this: 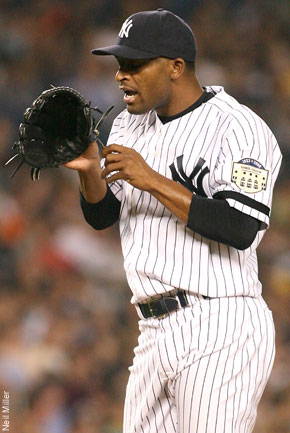 No Damaso, it is not the glove's fault that you have been injured all year.

See, Joba is not babied.

Many people think Joba Chamberlain is babied, and they point to Nolan Ryan who is trying to change the way pitchers are handled. However, even Nolan Ryan’s organization (the Rangers) are being extra careful with one of their young pitchers. Neftali Feliz is being handled with the same rules as the Joba rules of 2007. Some people just don’t realize that orginazations need to be extra careful with their young pitchers, and not only think about the present, but think about the future.

You may or may not know that the Mets placed Billy Wagner on waivers, but anyway the important news is that the Red Sox claimed him. While Wagner is not young anymore, and is coming off a big injury, he could help a contender like the Red Sox or the Yankees. In case you are wondering the Yankees may have claimed Wagner as well, but the Red Sox get first dibs because the waiver system goes by record, meaning the teams with worse records gets a shot at a player before a team with a better record. Oh well, let’s just hope that either a)The Mets pull Wagner back and are stuck with him and his big contract or b)The Red Sox get Wagner and he stinks.