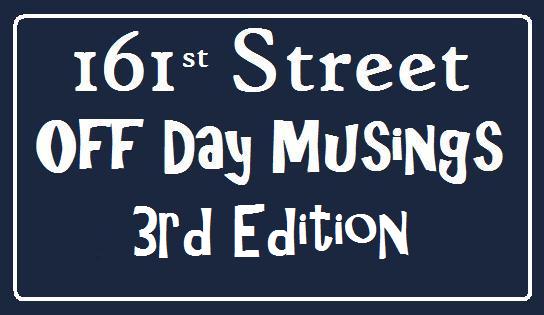 Right now everything is going well in Yankee Universe, winning seems to do that. After losing series to both the Nationals and the Marlins, things weren’t looking so good, and many were calling for Girardi’s head. However, since then things got back on track and the Yankees took 2 out of 3 from the Braves, and swept the lowly Mets. Today the Yankees are off, and they are gearing up for 7 game home stand, in which they play the Mariners 3 times and the Blue Jays 4 times. After that the Yankees set out for a road trip to Minnesota then Anaheim before the All Star Break begins. Let’s not get to ahead of ourselves though, because for now we should just be enjoying an off day, but I know there are many people out there (myself included) who don’t like off days because they want to see Yankee baseball every day. While, I can’t do anything about the Yankees not playing, I can hopefully quench your thirst for baseball with a few stories, links, and rumors.

Rivera the great reaches his 500th save

Last night Mariano recorded his 500th Major League save, 2nd on the all time list to Trevor Hoffman who has 571 saves. Despite how great Hoffman is, we all know that Mariano is the greatest reliever of all time. What makes Mo great is that his only goal is to help his team win, he is not trying to set records or anything. After last night’s game, things got emotional as every member of the Yankees gave Mo a hug. All of his teammates were so happy for him, some people got some memorabilia. Cody Ransom got to take home the bat that Mo used in the at bat in which he got his first Major League RBI. Chien-Ming Wang asked Mo to sign a ball to give to his son, JJ Wang, so that JJ would always know that his father played with the great Mariano Rivera. He truly is unbelievable. Recently, ESPN sat down with Mariano for an interview, it was a few days before he actually got his 500th save. It definitely is worth a watch, it was just amazing to see how humble Mariano really is. Check it out.

Should I stay or should I go?

According to PeteAbe, Jose Molina is set to return to the big league roster very soon. He was with the team yesterday, and he did some base-running drills. Now he will begin a rehab assignment that should last for about a week before he rejoins the Yankees. The big question though is, “What to do with Fransisco Cervelli?” There are only a few options:

The rumors keep on burning that Huston Street will be a Yankee. I still feel the same way on him, I’d absolutely love to have him in the bullpen as he would provide an 8th inning fix, and possibly even a future closer since he has already been closing ballgames, but the thing is that I don’t think he is worth the price that the Rockies are going to want for him. He only becomes more expensive now that the Rockies are winning ballgames left and right. How to you feel about the Huston Street comments? Feel free to comment.

How to get your baseball fix?

Well as you know the Yankees are not playing today, but that doesn’t mean you can’t watch baseball today. Here are some notable games set to take place tonight:

Update: I just realized this was my 100th post. Pretty cool.