Yesterday, the Yankees suffered a tough loss. Going into the 9th inning the game was tied 5-5. In the top of the 9th, Girardi brought Mo in to hold the score down. However, he could not. He gave up a triple to Ben Zobrist to start the inning, and everything went downhill from there. Eventually Mo had to leave in the middle of the inning, giving way to Phil Coke. In the end 4 runs ended up scoring, making the score 9-5 Rays. In the bottom of the 9th the Yankees did not go down without a fight, scoring 2 runs, but they could not manage to tie the game. 9-7 Rays, the final. The great thing about baseball though is that today, less than 24 hours after that tough loss, the Yankees get to go out a play a completely new ballgame. And here’s the lineup via PeteAbe they send out against Matt Garza in hope to take the 2nd game of the series: 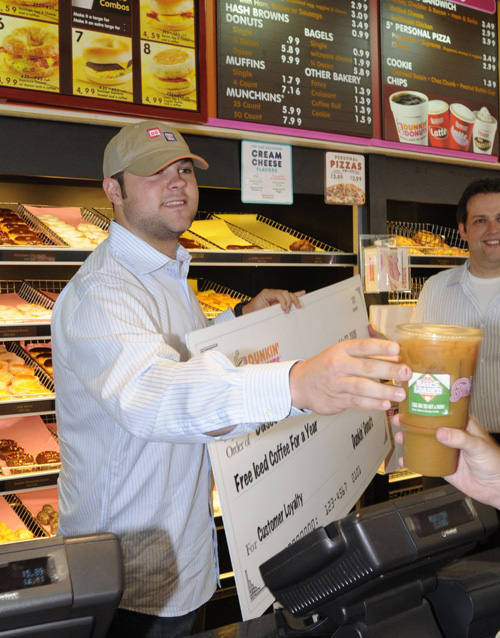 That's really him (not that impersonator), he did a promotion last year for Dunkin Doughnuts

Closer than they appear

According to Marc Craig, Brian Bruney, Damaso Marte and Xavier Nady are closer to returning. On Friday, Bruney threw 20 pitches (all fastballs) in a bullpen session. He said he felt no pain, hopefully he is not covering anything up. When asked about a possible return date, Bruney said, “If I was to guess, I’d say a week and a half, maybe less.” Marte threw 25 pitches off a bullpen mound and “spun some sliders from a shorter distance.” He and Bruney would really give the Yankees bullpen a boost. Xavier Nady played in an extended spring training game a couple days ago, and played catch from 90 feet yesterday. This is great news that he is back to throwing, if the Yankees can get Nady back it would be like they just made a huge trade.

I found this great website all about the bleacher creatures, andthey have one section with a bunch of videos and pictures of the bleacher creatures and Yankee Stadium. They have everything from the roll calls, to the YMCA bleacher creauture style, to having fun with a player (you guesses it, Nick Swisher). You should definitely check it out.

If you live in the New York area and have or considered purchasing MLB.TV, you probably know that Yankees games are blacked out because you live in New York and YES has the deal for Yankees games in New York. Well, that is going to change soon. The Yankees are going to become to first MLB team to have its games streamed live online within its home market. They have not announced many details, but here’s the article from the Sports Buisness Journal, in case you are interested.

I may do a live game blog if enough people are willing to participate in it. I would probably make it start at 1:05 and end around 1:30 or maybe longer. If you are interested and think you could participate just leave a comment or vote yes in the poll below. If you think I should make the live game blog at another time, just leave a comment stating what time I should make it.

Update
Maybe I’ll start the live blog after the game.