1B Mark “Thank God its May” Teixeira

And on the mound, Andy Pettitte 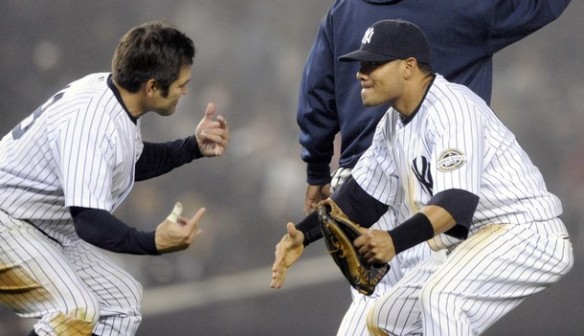 ARod went 1-6 today with a walk and a single. He will play 3rd base for the first time tomorrow.

Update 8:00
4-0 Yankees, top of the 3rd. The Yanks scored their runs on a Hideki sac fly, a RBI single by Cano, and two run home run by Posada. Nick Swisher was hit on the elbow by a pitch and has since been removed from the game. Let’s hope he’s okay.

Update 9:06
4-2, top of the 6th. Pettitte left the game with the based loaded. Melancon came in and as I type this he is giving up a bases clearing triple. The runs are accounted to Andy. 5-4, Angels lead.

9:12
Melancon allowed one more before he finally ended the dreadful 6th inning.

9-8 Yankees. In the bottom of the 8th, the Yankees trailing by 5 runs, the Yankees closed the gap to one. It started with a double by Cano, a walk by Jorge, then a single by Gardner to load the bases. Then Melky came up and singled to score Cano, then Pena singled to score  Posada and Gardner, the Jeter grounded out to score Melky. Once again, Angels 9, Yankees 8, heading into the 9th.