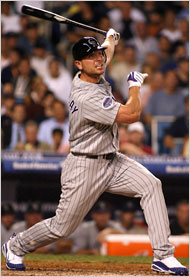 Matt Holliday hits a home run during the 2008 All Star Game at Yankeee Stadium.

Back in the offseason Tyler Kepner spoke to Matt’s father, Tom Holliday. In his telephone interview with Tyler, Tom went as far as saying, “If someone would have called me today and said Matt had gotten traded to the Yankees, I’d have been hunting for a place to celebrate.” I think that is pretty cool.

The thing is, as great of a player Matt Holliday is, I do not know if I want the Yankees to add another long term contract to their team. A year ago I would have signed him in a heartbeat, but now with the addition of CC Sabathia and Mark Teixeira, I do not know if the Yankees should give another long term contract away. I  would definitely consider it with Damon and Matsui coming off the books, but at this point I would just see how Matt does this year in the AL. After the year, the Yankees can evaluate how Holliday did in Oakland and make a decision from there.