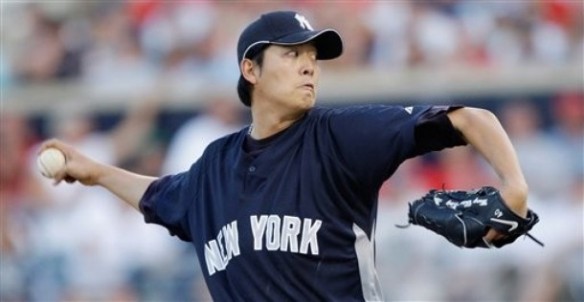 Chien-Ming Wang pitched today in an extended Spring Training game. According to Peter Abraham, he threw 91 pitches, 70 of them for strikes. Wang walked none and struck out 11. He about 91 mph with his fastball. That does not sound bad, but I do not think he was pitching against very good hitters, so we will have to wait for more information to emerge before we can draw conclusions. One thing that I found interesting from Pete’s article was the following:

Without being there, it’s impossible to say how he looked. The AP had a reporter there and this post will be updated as more information comes in. I think almost regardless of how he looked, however, it seems likely the Yankees will put Wang on the disabled list against his wishes.

I do not know if I agree with putting Wang on the DL. Obviously, if the Yankees definitely see that something is wrong and feel that he will have to work it out pitching in real games (risking getting bombed for a few starts), I would agree with putting him on the DL. Anyway, if Hughes does come up I would be pretty excited because I really have high hopes for him, however it would be disappointing to see Wang on the DL or struggling (any more than he already) has in the majors.

Via Pete Abe, Nardi Contrereas told reporters that Wang needs more arm strength and that his sinker is not consistent enough.

I am now pretty sure that we will be seeing Hughes on Tuesday.

Wang allowed 9 hits and 4 earned runs against a team of Phillies prospects. As much as do not want this to happen, it looks like it is best for the team to put Wang on the DL. A Hughes start on Tuesday against the Tigers appears imminent.

Update from the Associated Press:

“Good day,” Wang said. “Sinker down more, but sometimes got higher and the ball didn’t sink.”

“He doesn’t have the arm strength he had last year,” Contreras said. “But he hasn’t pitched in eight months prior to this spring training. What I saw today, he had the best slider I’ve seen since I’ve known Chien-Ming. The slider has improved and the changeup is very good. His offspeed pitches are coming in really well.”

Yankees vice president Billy Connors worked on mechanics with Wang before the game, including staying back a little longer during his delivery.

“I thought he did well,” Connors said. “What I looked for was groundballs on his sinker. He had a good sinker. In this league here, you throw groundballs the ground is so hard they’re base hits. He needed to get out there and let his mind back in the groove.”

Hmm, I guess we will just have to wait and see.